FNF Vs. Shaggy v2 is one of the most popular FNF Mod based on the Friday Night Funkin game. This Vs. Shaggy v2 FNF Mod is a little bit difficult so you can play it on Easy mode. In This FNF Vs. Shaggy v2 Mod, Boyfriend do epic rap battle against Shaggy from Scooby-Doo. There is only one difficulty level, which is hard. Last song SIX NOTES?. Now with week 2 as Shaggy goes SUPER SAIYAN and 9 notes. You might also like FNF Vs. Big Brother and FNF Vs. Neo

You can use WASD or Arrow Keys to play Shaggy v2 FNF Online Mod on your Computer. You have to press the keys as notes reach the judgment line. You can Start or Pause the Shaggy v2 Mod using the Enter key. 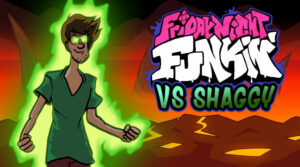