FNF Vs. Slenderman is one of the most popular FNF Mod based on the Friday Night Funkin game. This Vs. Slenderman FNF Mod is a little bit difficult so you can play it on Easy mode. In This FNF Vs. Slenderman Mod, Boyfriend rap-battle against Slenderman,  a fictional supernatural character that originated as a creepypasta Internet meme created by Something Awful forum. You might also like FNF Vs. Selever and FNF Vs. The Holiday

You can use WASD or Arrow Keys to play Vs. Slenderman FNF Online Mod on your Computer. You have to press the keys as notes reach the judgment line. You can Start or Pause the Vs. Slenderman Mod using Enter key. 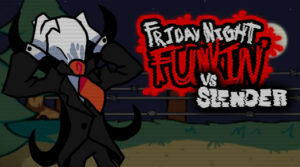