You’ll battle against Pibby Pico, Pibby Ben 10, Pibby Bill Ciper and the other Gravity Fall characters, Glitchy Red Bird from Angry Birds and green peashooter, Tom from Tom & Jerry, Glitched The Fairly OddParents characters, Pibby Monika, and others. You might also like FNF Vs. Neon and FNF Vs. Hayase Nagatoro 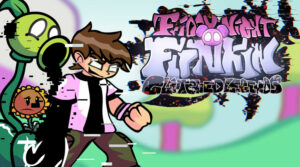