FNF Vs. Nonsense is one of the most popular FNF Mod based on the Friday Night Funkin game. This Vs. Nonsense FNF Mod is a little bit difficult so you can play it on Easy mode. In This FNF Vs. Nonsense Mod, You will have to face an atypical character. Landed with brutality by breaking the wall of the house, Boyfriend will force Nonsense to do a rap battle to compare their level as a singer and determine who will be the best. You might also like FNF Vs. Suicide Mouse and FNF Vs. Bob and Bosip

You can use WASD or Arrow Keys to play Nonsense FNF Online Mod on your Computer. You have to press the keys as notes reach the judgment line. You can Start or Pause the Nonsense Mod using the Enter key. 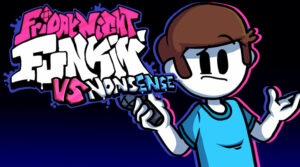