FNF Vs. Aflac Remastered is one of the most popular FNF Mod based on the Friday Night Funkin game. This Vs. Aflac Remastered FNF Mod is a little bit difficult so you can play it on Easy mode. In This FNF Vs. Aflac Remastered Mod, you will face the famous minecraft player Aflac but also Dave the character of Dave’s Fun Algebra Class! Arrived by mistake on Aflac’s Minecraft server, Boyfriend and Girlfriend will have to prove their worth during a week of 3 songs. You might also like FNF Vs. Oswald and FNF Vs. Spinel 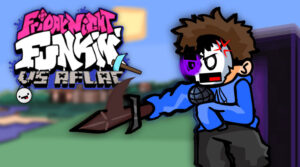