FNF Vs. Neo is one of the most popular FNF Mod based on the Friday Night Funkin game. This FNF Vs. Neo Mod is a little bit difficult so you can play it on Easy mode. In This FNF Neo Mod, Overhauled, from character colors, icons, backgrounds, and songs!!!. This mod includes all new stuff such as custom-written songs, brand new SFX, and themed visuals, to give the game a more futuristic, neon look!. You might also like Sarvente’s Mid-Fight Masses and B-Side Remixes

You can use WASD or Arrow Keys to play FNF Neo Online Mod on your Computer. You have to press the keys as notes reach the judgment line. You can Start or Pause the FNF Neo Mod using the Enter key. 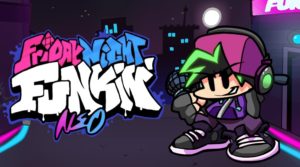