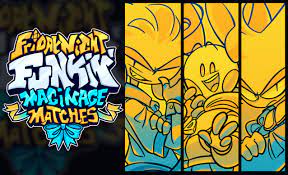 FNF Maginage Matches is one of the most popular FNF Mod based on the Friday Night Funkin game. This Maginage Matches FNF Mod is a little bit difficult so you can play it on Easy mode. In This FNF Maginage Matches Mod, Boyfriend had the idea to challenge to a rap battle the nicest guy in school, Tac. And it’s on the song Tic Tac Foe that the first musical notes will be played. But this first duel may not be enough to attract the attention of the other students. Fortunately Tac’s friends will soon join the battle. You might also like FNF Vs. Tails.exe and FNF Vs. Hecker

You can use WASD or Arrow Keys to play Maginage Matches FNF Online Mod on your Computer. You have to press the keys as notes reach the judgment line. You can Start or Pause the Maginage Matches Mod using Enter key.